On the 6th of May 1971 the alleged kidnapping and murder of a young girl takes place in the seaside city of Genoa (North Italy). 50 years later there are still many questions unanswered.

It’s 5 pm on Thursday afternoon and she is leaving the Swiss School on Peschiera Street. This is the last time she is seen before she vanishes into thin air.

Her lifeless body is found floating a few hundred meters from the beach of Priaruggia, about 6 km away from the ancient Port of the Liguria capital.

It’s Thursday May 20th, 15 days after she was last seen leaving her school.

Lorenzo Bozano, a 25 year old man from Genoa, is suspected, arrested, and convicted for the kidnapping and murder of Milena.

He was not blond, nor skinny.

The affair Sutter-Bozano: a university research

In 2018 I wrote a university book with the criminologist Laura Baccaro. The Italian title of the book is: “The Biondino della Spider Rossa. Crimine, giustizia e media”.

You can find our book on the Amazon website. There you can purchase the paper book or the ebook.

Dr. Baccaro and I wrote that book after a university research – still in progress – on how the media dealt with the Milena Sutter’s story.

I investigated every clue of the case. And I discovered a lot of discrepancies. 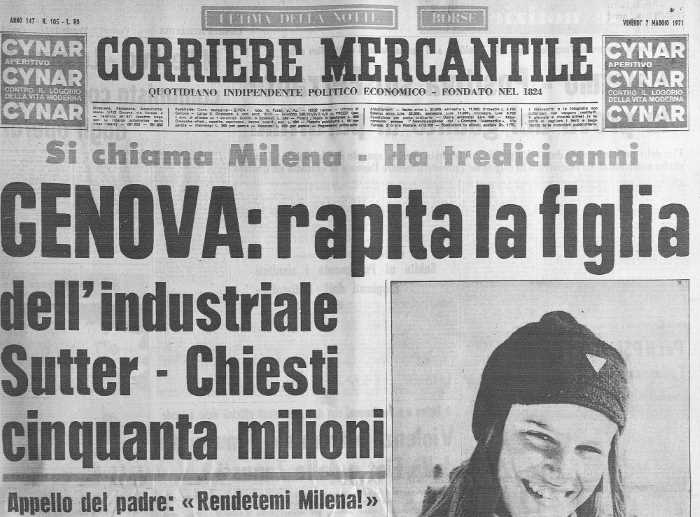 Genoa, May 1971: Milena Sutter’s kidnapping. The first newspaper which published the news about that strange criminal case

The research about Milena Sutter’s case has lasted ten years

Laura Baccaro and I still have many hypotheses to formulate about what really happened to Milena Sutter.

Our research came about by chance. I must admit that as a professional journalist I have never been interested in crime news.

During my 40 year career as a journalist, I have read articles about important Italian criminal cases – such as Wilma Montesi’s (in some ways similar, 1953, Rome) – but I had never written anything in that field.

Since the beginning of my career as a journalist, in 1978, I have dealt with foreign affairs, my passion at that time. So, crime stories have never had of my interest.

Why did I decide to study the Milena Sutter and Lorenzo Bozano’s case?

One spring morning, in 2010, a graduating student of mine – Laura Leonesio – asked me for a thesis.

Since 2003 I have been teaching Intercultural Journalism and Multimedia at the University of Verona.

Since 1998 I have done a lot of research and written three academic texts about media’s reporting on immigrants, and cultural diversity.

You can find two of my books in the Harvard and Yale’s libraries.

In 2010 Laura Leonesio, a student passionate about crimes, asked me for a degree thesis with a crime report at the center. I refused: crime news just wasn’t in my study interests.

The student insisted. And I promised to think about it.

Thinking about what topic to propose to the student, something reminded me the case of the “blond thin man with the red sports car”. Indeed, he was neither blond nor skinny, so that thing intrigued me. 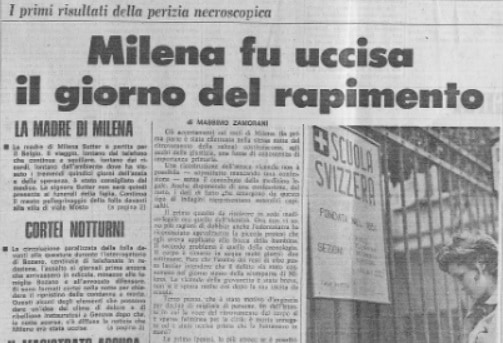 The city of Genoa and the Sutter’s criminal case

The city of Genoa has been in my heart for many years because I spent some summers there during the high school.

In the 70’s, Genova was an important city in the North if Italy, with large factories and old tradition of trade. With Milan and Turin, Genova belonged to the so called “industrial triangle”.

I still remember when I was 14 years old and, in my house in Valpolicella (Verona) I was reading the “Bozano memorial” on the Italian magazine “Gente”, which my mother Maria used to buy.

That tangle of memories and that story linked to Genoa has remained well impressed in my heart and my mind.

Lorenzo Bozano was looked as “blond and thin” (“biondino”, in Italian) by journalists and magistrates.

He was brown and robust, and it’s curious to see that nobody noticed that discrepancy in his look.

The case of the “blond man with the red sports car”, who was not blond nor thin, came in my mind suddenly.

So I decided to proposing to Laura Leonesio the thesis on how the Genoa’s newspapers had treated the figure of Lorenzo Bozano.

The question was simple: “They saw him as a person? Or as a character?”.

Moreover, there was another strange aspect in that criminal case. The “Sutter Case” was considered the “Bozano Case”, by the Genoa newspapers.

This led to not studying the victim as it had to be studied. 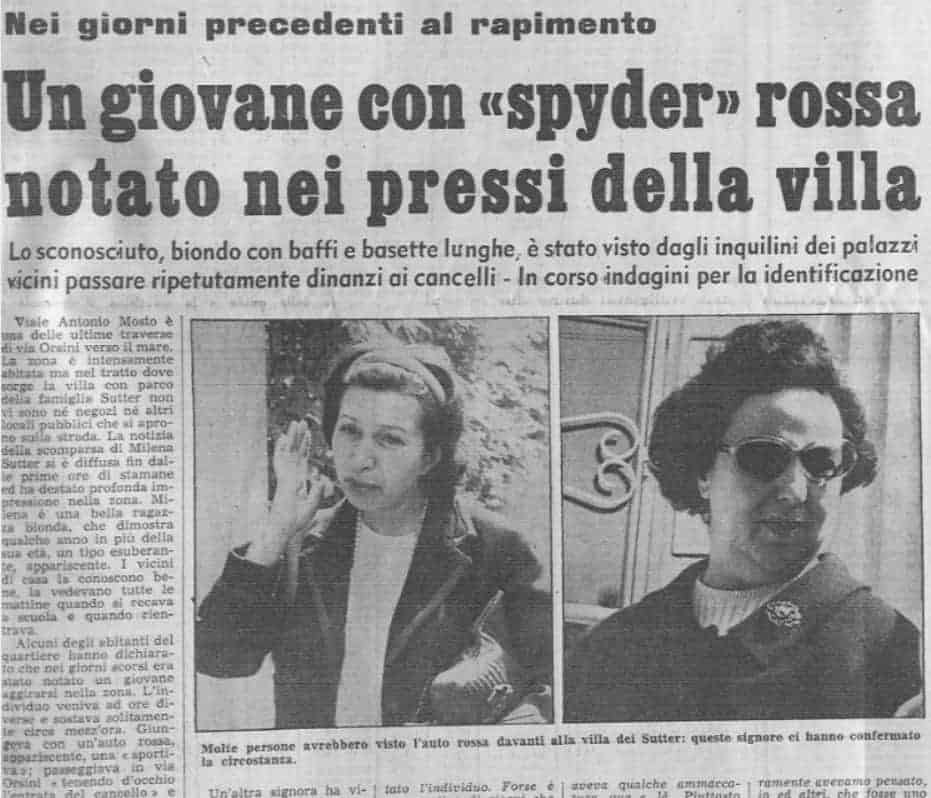 They tried to understand whether Bozano was innocent or guilty, before the trial had to begin.

According to David Canter, father of Investigative Psychology the victim reflects the profile of the offender.

I interviewed professor Canter in December 2011 at the University of Huddersfield. He explained that many times people, and investigators too, are interested in the “motive” of a criminal case.

It would be better interested in what really happened to the victim and their profile.

So we need to study the victim. We need to analyze it from the victimology point of view.

If we did not do that, we risk to not understanding what really happened in a criminal case.

For these reasons, after ten years of studying Milena Sutter’s case, I can say that the Police investigator Angelo Costa – the chief of the investigations – did not fully understand that criminal case.

Mister Costa had an interesting intuition, not believing in any way to the kidnapping’s version of the case.

I fear, however, that the head of the Gena Mobile Squad was dazzled by that intuition.

That’s why, in my opinion, it was not possible to understand that case in its complexity.

The “guilty party” has always been a majority in Genoa. Most of the citizens thought that Lorenzo Bozano was guilty.

That situation explains why the Genoa newspapers were undoubtedly against Bozano.

For his part, Lorenzo Bozano did nothing – overwhelmed by a lot of accusations – to free himself from the criminal figure represented by the media.

I must say that I have never believed that Lorenzo Bozano is innocent.

Indeed, I can say that the “naive reader Maurizio Corte” tends to think he is guilty.

The scholar Maurizio Corte, however, must admit that there is not legal evidence of the Bozano’s involvement in the Sutter’s case.

The are many doubts and some critical points in that criminal story:

The primacy of the Science and the right to accurate investigations

I have learnt some lessons by that criminal case. As a father, as a journalist and as a researcher.

The first lesson is the dutiful primacy of Science, in this case of Forensic Medicine, on the positions of “judicial policy” that can be useful.

After 49 years we know that the forensic report of professors Franchini and Chiozza on the time and causes of the death of Milena Sutter is not founded. 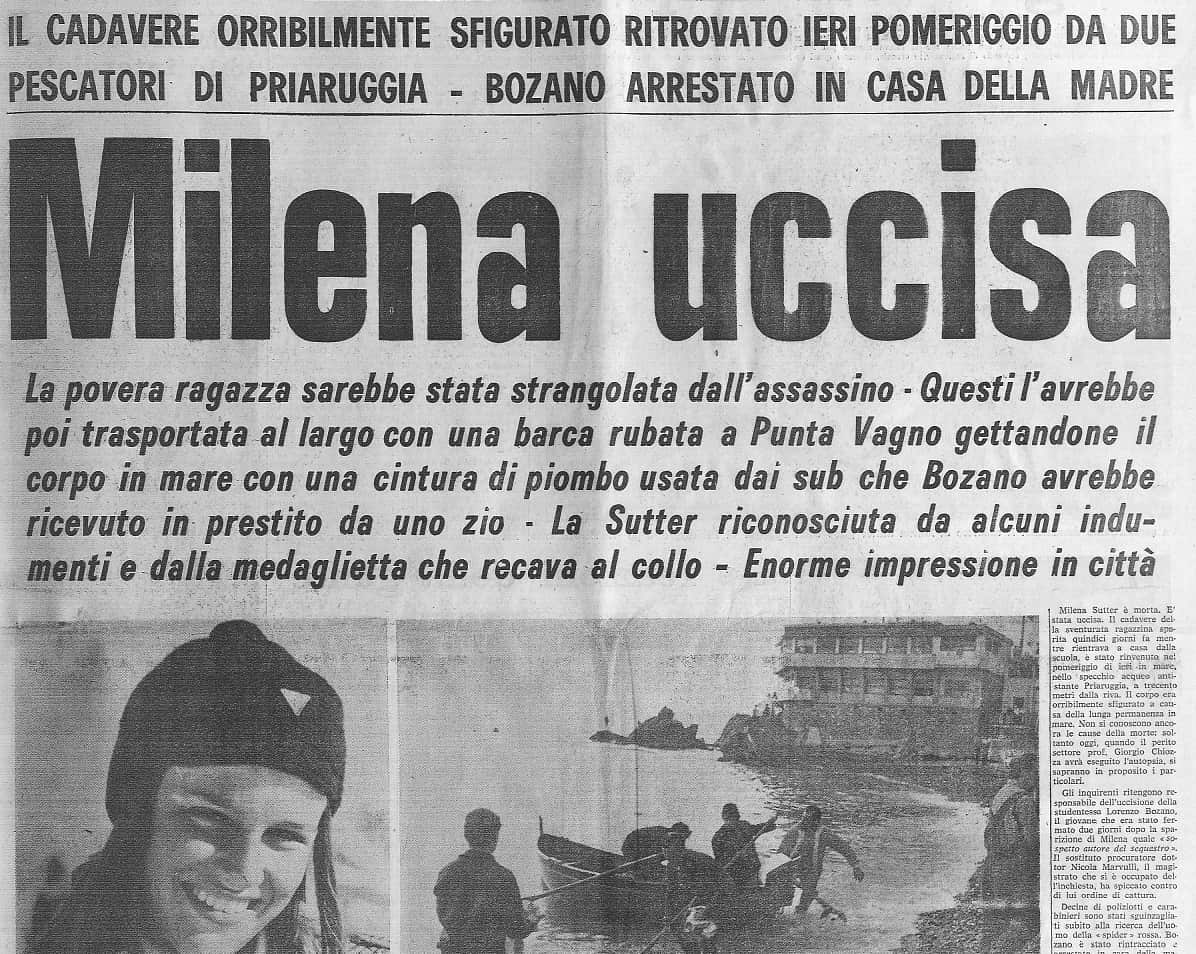 Furthermore, as Professor Daniele Rodriguez (teacher of Forensic Medicine at the University of Padua) shows in my book on the case, the judges of the first and second instance trials added arbitrary and erroneous interpretations to them.

The second lesson, from the case of Milena Sutter and Lorenzo Bozano, is that the suspect has the right to a careful investigation in all directions.

Investigators can’t stop at the first one suspect that best fits with the clues. Are they interested in their reputation as policemen? Then they must investigate in every direction.

In Bozano’s case, there are clues that are partly unfounded, partly unreliable. And I’m afraid other ones was even invented.

The third and disturbing teaching is the “demolition of the person-Lorenzo Bozano”.

A murderer must be judged on the basis of evidence beyond any reasonable doubt.

In the case of the (alleged) kidnapping and (alleged) murder of Milena Sutter, doubts have flourished.

In fact, the deeper you go into the Sutter-Bozano case, the more those doubts thrive. They boom 49 years later as they flourished in 1971.

This criminal case and its connection to the role of the media has been studied and investigated by Maurizio Corte, lecturer at the University of Verona (Italy) and his team.

This website uses cookies so that we can provide you with the best user experience possible. Cookie information is stored in your browser and performs functions such as recognising you when you return to our website and helping our team to understand which sections of the website you find most interesting and useful.